Quantum engineering is an emerging field that fuses physics, engineering and computer science. It incorporates radical new ideas for computing, materials, devices and sensors. Our Quantum Engineering and Computing team is developing this next generation technology, and exploring new ways to apply it to computing, sensing, and communication.

Scientists in our cryogenics laboratory are studying qubit systems based on superconducting-circuits. These systems are cooled to milli-Kelvin temperatures and controlled with fast microwave electronics.

To meet the demands for complex experiments, we have developed custom microwave hardware called the arbitrary pulse sequencer, or APS, to control a large number of qubits with complex gate sequences. We have also developed a low-latency feedback system with a field-programmable gate array for determining the state of our quantum circuit – a key capability for implementing error correction. 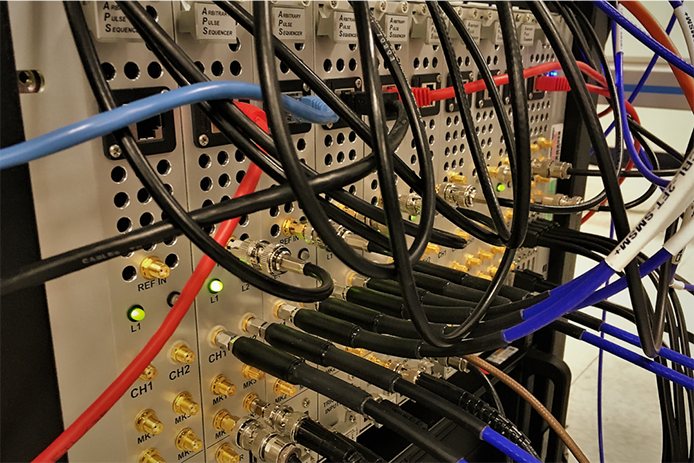 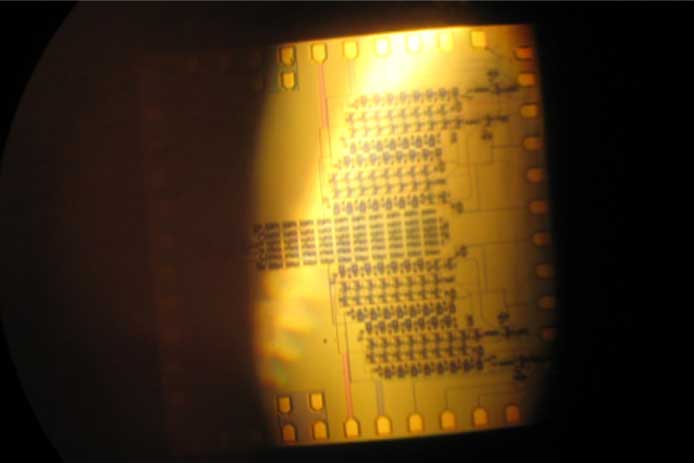 To build a superconducting quantum computing system, qubits, as well as surrounding classical electronics, must be scalable. We have reported on a key supporting classical technology for microwave controlled superconducting qubits that would enable scaling of a quantum computer beyond impending I/O heat load and bandwidth bottlenecks. And we are exploring applications of scalable cryogenic technologies for qubit systems that include cryogenic digital logic, such as SFQ technology and
superconducting microwave components.

Research in materials science is a key propellant for technological advancement. To face the demands for increasing computational power and sensing capabilities, we study emerging 2D materials with quantum properties that can be exploited in novel electronic devices 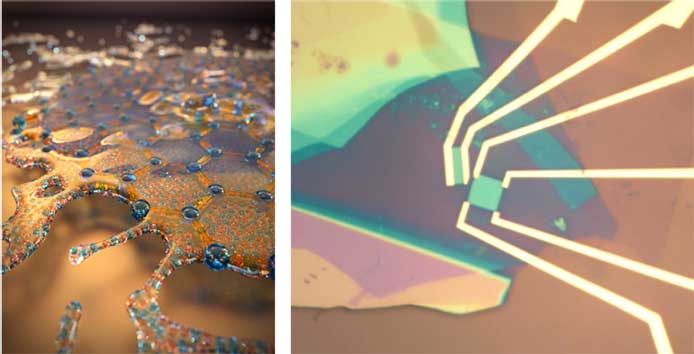 One of these wonder materials is graphene, an atomically thin mesh of carbon atoms through which electrons can move relativistically as if they possess no mass. Making use of the minute specific heat of these electrons, our research shows that graphene can detect photons with high sensitivity in wide bandwidth, from microwave to infrared frequencies. In addition, we now have the ability to stack layers with different characteristics into complex heterostructures that can be matched within one device to suit the intended application. We are also exploring new states in Josephson junctions integrated with topological materials.

In order to perform high fidelity readout and control superconducting qubits, it is necessary to have microwave devices that can amplify quantum signals with low noise and insertion loss.

At Raytheon we are studying parametric amplifiers that have a wide amplification bandwidth of several gigahertz and high saturation power. This enables the amplification of multiple readout tones at different frequencies. 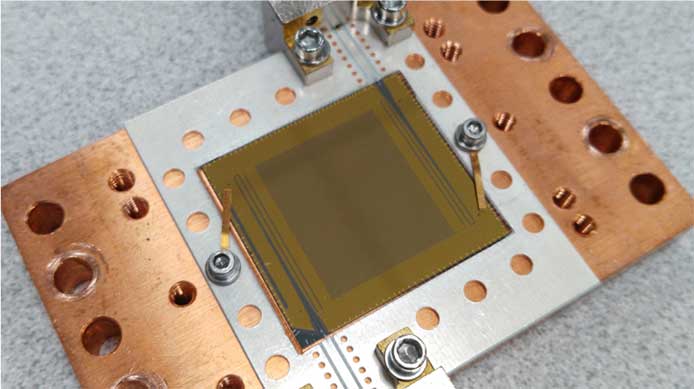 We are also studying different applications of parametric interactions. By exploiting the interference between multiple parametric processes in the same device, we obtain directional amplification and nonreciprocal propagation on a superconducting chip. While commercial RF circulators are usually used for this purpose, they are bulky and noisy components that cannot be integrated with our quantum devices.

Our group researches optics and integrated photonics for a broad range of application areas both in the classical and quantum domains of sensing, computing, signal processing, communications, and metrology. Examples of ongoing research projects for the aforementioned applications areas are: